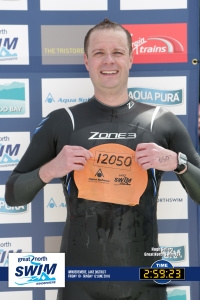 Hugh Sellars from the BASC Masters Squad had a very successful trip down to the Lake District to compete in the Great North Swim over the weekend of June 10th. The Great North Swim is the UK’s biggest open water swim event and an estimated 10,000 people were predicted to take to the water over the three day festival on Lake Windermere.

Hugh swam in two different events over the weekend, swimming an open 1 mile course on the Saturday, followed by a 10km swim on the Sunday. Hugh completed the 1 mile course in 27 mins 51 secs, narrowly missing a new PB by just 60 secs.

Undeterred Hugh then swam a fantastic 10 km on the Sunday coming in under his 3 hr target time in 2 hrs 29 mins 23 secs! A great result when you consider that Hugh had only swam that distance twice before in an indoor pool! Perfectly calm water conditions on the Sunday with a balmy 20 degrees water temperature, combined with the great atmosphere of the event itself to encourage Hugh to push on round each of the 6 one mile laps to complete the distance without stopping. A terrific achievement in itself!

Hugh is already preparing for his next challenge event the Windermere One Way, which is a 10 mile open water swim the full length of Lake Windermere. Wetsuits are optional on that one apparently!

By all accounts there are a few Open Water Swimming enthusiasts in the Masters Squad. We look forward to hearing about more of your exploits in the future!